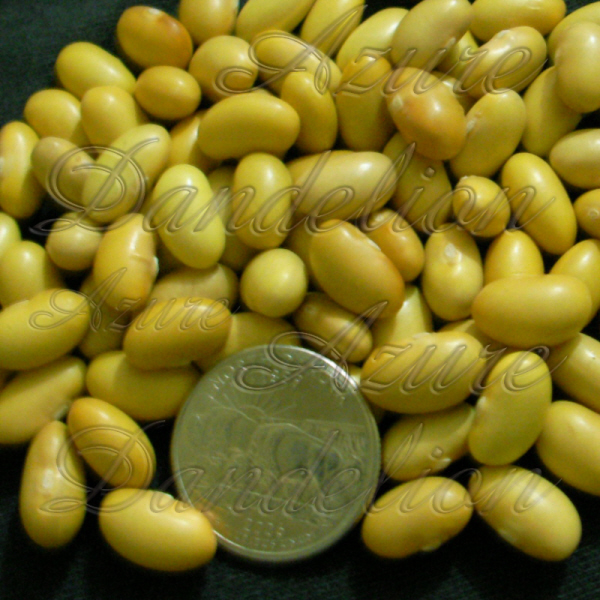 Grow your own Mayo Coba Beans with Heirloom seeds from  AzureDandelion.com

Many cultures believe that you can change your fate for the New Year by your meal choices on New Years Eve and New Years Day.  In some areas of Spain for instance people eat 12 grapes at the stroke of midnight.  One grape for each stroke of the clock, or month in the year.  They believe this will bring a prosperous new year.  Other coutries share this custom but have beliefs that the flavor quality of each grape will reflect what that month of the comming year will be like.  If the first grape you eat has terrific flavor, January is going to be a great month.
Some cultures believe if you leave a little food on your plate past midnight, you won’t be seen as greedy and you will have plenty of food in the New Year.  Other cultures believe if you leave food on your plate you will be seen as wasteful.  Some believe if no food is left on the table at midnight, their lives will be blessed in the New Year.

Many cultures share the belief that eating a meal percieved as “poor” on New Years will bring riches in the coming year.  The general belief is the hope not to be seen as a glutton to the higher power the particular culture believes in.  This “poor” meal also seems to have a common theme of the food resembling money – coins or bills.  Beans, peas, lentils and cowpeas represent coins. Grow your own Black Eyed Peas with Heirloom seeds from  AzureDandelion.com Grow your own Georgia Collard Greens with Heirloom seeds from  AzureDandelion.com

Pork is also eaten as part of many of these traditions.  The pig sybolizes progress, because it’s grazing habit of eating while moving forward.
In the South and many other parts of the United States the New Years meal includes Black Eyed Peas and Collard Greens. Grow your own Pink Eyed Purple Hulle Cowpea with Heirloom seeds from  AzureDandelion.com

In some Northern parts of the United States it is customary to include Turnip Greens and Baked Beans in the meal.  The beans are cooked with molasses to represent richness and a sweet life. Grow your own Butterscotch Bean with Heirloom seeds from  AzureDandelion.com